The recent devastating fires of Northern California had one small bit of relief when the cat of an evacuated family returned to their home with only a few singed whiskers. 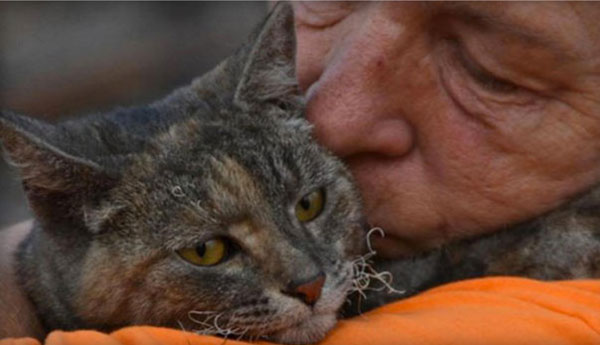 I hid and only got my whiskers singed

That is why people say that cats have nine lives. Ruthie Rosemary truly has lived one of her nine lives after miraculously escaping and surviving a North Carolina wild fire for over five days, except for a few singed whiskers.

Right now wild fires are still raging in North Carolina area, and the fire fighters are working night and day to contain them, the roaring wild fires continue to devastate the area. Many people are fleeing with their most prized possessions, including their pets.

One family was devastated when they tried to flee, because their beloved cat named Ruthie Rosemary who was such in a frenzy because of the fires, jumped out of the moving vehicle while they were being evacuated.

Debi and Jeff Brusatori had to evacuate their Northern California home five days ago along with a lot of other people; the fires were burning through Trinity County where they lived. What happened, they later told reporters, is that they loaded their beloved tabby, Ruthie Rosemary, into the car to accompany them. The cat then, the Brusatoris told CBS Sacramento, managed to jump out of the vehicle as they drove away.

Debi and Jeff had to keep driving as there was nothing else they could do. They were absolutely devastated and thought that they would never see their beloved Ruthie Rosemary tabby cat ever again. How could she or anyone survive the fires?

Upon returning to their seared property, to their delight, the Brusatori’s heard an unexpected, yet familiar sound: a familiar “mew” from Ruthie Rosemary, who proceeded to climb out from under a severely burned truck.

Firefighters can’t say where Ruthie Rosemary hid while the fire was roaring, as the flames were hot enough to melt the aluminum truck she crawled out from under, but it was definitely a safe spot. Ruthie Rosemary emerged from the five-day ordeal unscathed, aside from singed whiskers and eyebrows.

Although the wildfires raging through Northern California are not yet contained, one family is a little more at peace tonight. Their tabby cat managed to survive the wildfire for nearly a week on her own, finally making her way home today.

Next order of business: a good meal and lots of cuddles.