How Do You Get One Green Eye and One Blue Eye In A Cat?

Her name is Venus and she is beautiful. Look at her eyes and her markings. Have you ever seen anything like her before? I for one would love to have a cat like her, but I don’t so at least I am writing about her. There is even a stuffy made to look like her. How sweet.

One thing I noticed right away is the black line down the middle of her face, almost perfectly symmetrical. It’s interesting how one part of her face is black and the other is orange. It’s even the same for her nose. Half of her nose is pink and the other half is black. How cute.

Watch the video below to find more information about Venus and how much she loves her new stuffy, one that looks exactly like her. I wonder if she knows it is her? That’s something only a cat would know and you have to be part cat to find out. 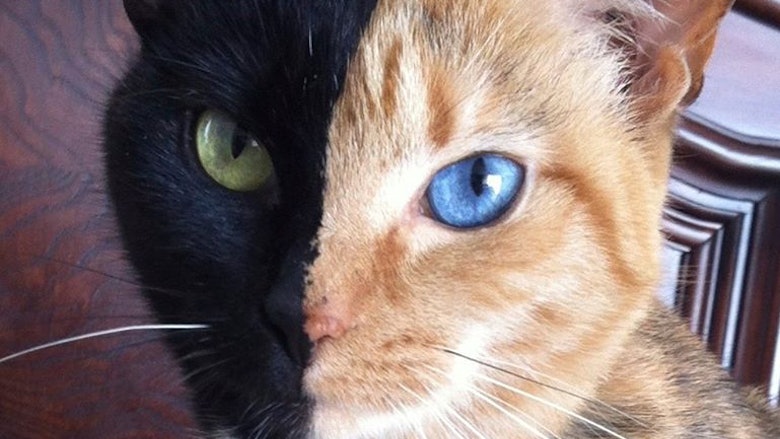 One of the cultural laws of the Internet is that it is bursting at the seams with adorable cats: bed-stealing cats, OITNB cats, and black-footed cats, among others.  However, it’s not that often that cats come along who are truly memorable.  Unique.  Special.

…OK, sorry, I know it sounds like I’m describing the LEGO movie with cats or something.  But Venus the chimera cat could, honestly, look right at home in a sci-fi movie dreamed up by Spielberg or James Cameron.  She has one-of-a-kind coloring: half her face is black, while the other is orange.  What makes it even better is that she has heterochromia: one eye is green and the other is blue.

According to her Facebook page, which has more than 170,000 likes, Venus started life as a stray in North Carolina.  Her animal-loving owner took her in because she looked like a cross between the two cats the owner already cared for.  Although most of the pictures posted on the page are just for kicks, some of them contain some social activism: Venus and her owner have called for greater awareness of the USA’s animal overpopulation issue and the sad necessity of kill shelters. Alexandra says, “personally I hate the word ‘kill shelters’. To me there is no such thing. The cat may fair better outside than in a ‘kill shelter’. ” 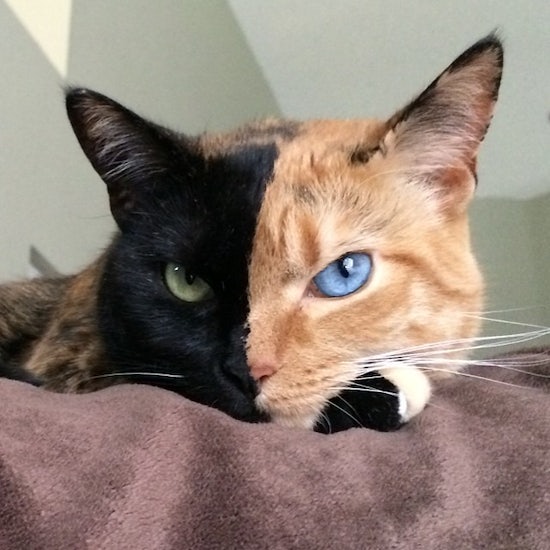 If you google “Venus chimera cat,” you’ll get plenty of questions about whether Venus is just a good Photoshop job.  However, Snopes verifies that she’s real, and there are plenty of videos of her on Youtube.  Most people have accepted that Venus just won the genetic lottery.  GUND, a plush stuffed animal manufacturer, has even made a stuffed cat in her honor.  (It retails for $30.)

Here’s Venus snuggling up with her mini-me (which is actually not so mini):

Now, a quick science lesson so I don’t misinform you: chimerism occurs when two embryos fuse together, creating a creature with two sets of DNA .  Venus is probably not a real chimera — she’s just extremely lucky.  But the “chimera” nickname has stuck, adding to the air of mystery she generates.

However it happened doesn’t necessarily matter that much, though.  I’m just glad Venus and her owner are using her fame to advocate for good causes.  And I’ll be honest: I’m hoping that she’ll show up in a Hollywood blockbuster someday.  She’s just as good-looking as the Cheshire Cat — and she’s real.